20+ Funniest Hamilton memes on the internet

Hamilton is a musical film that blew the minds of the audience. The musical is based on Alexander Hamilton, who was one of the United States’ founding fathers. Actor Lin-Manuel Miranda produced, composed, and wrote the whole musical.

The actor later revealed that he wrote the music for six years and finally made it. Moreover, Lin-Manual himself played the primary role of Alexander Hamilton.

Disney+ released the movie+ on July 3, 2020. Later, it claimed its position to be the most-watched film in 2020. Moreover, the musical got nominated for Primetime Emmy Awards, in which it won two.

The musical is filled with historical events, drama, and even comedy. So it only makes sense that Hamilton entered the meme world. Below are some of the hilarious Hamilton memes for your enjoyment.

You can also check Funniest Freaky memes just for your entertainment.

You may be one of those people who think they don’t have hidden talents. But if you know the lyrics of Hamilton, you are a very talented person already. The musical has so many songs, and remembering all those is no easy task. So just add this to your talents from now on.

The Coronavirus has canceled all the plans that you have had for 2020. Moreover, the virus has kept up from shopping, partying, and even watching Hamilton in theaters. Kind of like Eliza for young Hamilton here.

Have a look at ‘Big Brain Memes’ best on the Internet.

Watching Hamilton only once is just not an option. So you watch it again and again. Finally, you gather around the people you think would enjoy it too and watch again with them. During that time, you have memorized all the lyrics, so you sing. While your friends or partner just stares at you blankly.

If Alexander Hamilton were alive, he would surely see the musical himself. However, I am not sure how he would have reacted. Because the musical shows various sides of him, they reveal some personal information too. I think this meme captures his reaction perfectly.

Eliza was a saint. She endured so much in the name of Hamilton. And Hamilton definitely did not deserve her. She always did what was suitable for him, and Hamilton threw it all away. Not cool, Hamilton, not cool.

I did not really like Peggy, but she deserved her own song. Do you agree?

Okay, I agree this was a bit of a stretch, but Anthony Ramos played the role perfectly. He was so awesome in this musical.

What did you guys think of Aaron Burr? I mean, he was very educated and calmer than Hamilton. But he lost his calmness at the end of the show and did the unspeakable thing. So all those admirations that audiences had for him were now all gone.

Hamilton was supposed to be released in 2021 in theaters, but things turned out better. On July 3, 2020, Disney+ released the movie, making it the most viewed movie of that year, totally making sense. But, again, the director captured the beauty of the musical.

Hamilton was remarkable in many things but not so great at staying loyal with some. For example, even though he married Eliza, he fell in love with both of her sisters at some point. And not to forget Alexander’s son, Philip, whom he loved unconditionally.

It is almost 2022, and corona is still here, sucking the joy out of our life. Guess it will never be satisfied like our Hamilton and Angelica weren’t.

Woah, Google, I think someone in your company is not doing their job.

Do you want to see how the honest Philip Hamilton looked like?

Check out 20+ Hilarious Guess I’ll die memes on the internet.

Here are the 40+ hilarious and wicked WikiHow memes you must see.

Visit here for the collection of memes. 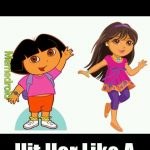 Next Story
Dora memes to bring back those childhood days