Who is Noah Shannon Green?

Noah Shannon Green is the son of popular American actress Megan Fox and American actor Brian Austin Green. He is the eldest child in the family.

Born in 2012, he is the first child of Megan Fox however Noah’s father Brian Green was already a dad to another son from his previous relationship.

Let’s get to know more about 8-year old Noah Shannon Green in this article.

Who are Noah Green’s celebrity parents?

Noah Green is the eldest child from the marriage of celebrities, Megan Fox and Brian Green. All in all the couple had three kids from their marital relationship.

Megan and Brian got married in 2010 after a long time of dating. They have an age gap of 13 which both seem to be okay with.

Both actors met on the set of ABC’s Hope and Faith and soon started dating afterward. Megan and Brian dated for six years before deciding to tie the know. They married each other in 2010.

Megan Fox is a well-known Hollywood actress and has starred in numerous movies throughout her career. She had started out her career as an actor and model during her early teenage years.

Since then she has starred in famous movies like Holiday in the Sun, Transformers, Transformers: Revenge of the Fallen, Teenage Mutant Ninja Turtles: Out of the Shadows, Jennifer’s Body, and many others.

She has been given many titles along the lines of “100 Sexiest Women in the World”, “The 25 Hottest Actors Under 25” and “Hot 100 Women” and has always been an icon of attractiveness and beauty in the public eye.

Her mother Gloria Darlene Tonachio was a real estate manager and her father Franklin Thomas Fox was a parole officer. She also has a sister.

Brian Austin Green is a famous actor who can be seen in many television series. He had started his acting career in the ’90s and has gained popularity ever since. On July 15, 1973, Green was born in Los Angeles, California to mom Joyce Green & dad George Green. His father was a Country & Western music artist. He also has a brother Keith and sister Lorelei in his family. He is currently 47 years old.

Some of his works include roles in TV series such as Beverly Hills 90210, Knots Landing, Freddie, and many others. Likewise, he has also been spotted in many television series as a cameo appearance.

During his career, he had been in relationships with co-actors Tiffani Thiessen and Vanessa Marcil. He also has a son with Vanessa Marcil named Kassius Lijah Marcil-Green. The pair was engaged but split up later.

Noah Shannon Green was born on September 27th, 2012. He is currently 8 years old. Noah was born in Los Angeles, the USA as the first child of the Fox-Green household.

“We have been very lucky to have had a peaceful few weeks at home, but I would like to release this myself before others do. I gave birth to our son Noah Shannon Green on September 27th. He is healthy, happy, and perfect.”

“We are humbled to have the opportunity to call ourselves the parents of this beautiful soul and I am forever grateful to God for allowing me to know this kind of boundless, immaculate love.”

Noah is a healthy boy with beautiful and long blonde-brown hair. He is around 4 feet tall and is currently in elementary school.

He is still very young and is very much interested in soccer and football.

Similarly, he is also trying to follow in his parent’s footsteps and is actively taking acting classes. He has made small cameos in his parent’s movies but anyways, he has supportive parents no matter what career path he chooses.

How many children does Megan Fox have?

Noah Green is the eldest amongst the three siblings of the Fox-Green family. He has an elder half-brother Kassius Lijah Marcil-Green who was born in 2002. Kassius is the son of Brian from his previous marriage with Vanessa Marcil.

Sources say that Noah’s relation with his half-brother isn’t that good, but he does have a great bond with his brother Bodhi Ransom Green and Journey River Green.

Bodhi ransom Green was born on February 12th, 2014. He is currently 7 years old cutest kid. He was exposed to being surrounded by the paparazzi from a young age even though Megan and Brian have strongly opposed the paparazzi for invading their privacy.

Megan’s youngest son is Journey River Green who was born on August 4, 2016. She happily shared pictures of him on her Instagram account. He is the youngest sibling and is just 4 years old now.

The three siblings have very interesting and unique names. They have great meaning behind them too. “Noah” means “Rest” or “Comfort” in Hebrew origins. Likewise, “Shannon” means “Old River” in Old Irish origins.

Similarly, “Bodhi” comes from the mother of three and stunning actress Megan Fox’s Buddhist beliefs. It means a state of being awakened and enlightened about the understandings of the world in the Buddhist roots.

“Journey” on the other hand means the journey of one’s life through all the ups and downs. Megan has really put in effort in naming her children.

She has said that being a mother is a very tiring job. She also shared that Journey is the calm one out of the three and his two brothers are constantly fighting.

We can see adorable pictures of the three siblings shared by Megan Fox on her social media pages.

Noah Shannon Green has a weird dressing sense. He has been exploring fashion and dresses lately and has a fondness for dresses!

At the young age of 8 years, Noah has developed a sense of fashion and has been seen wearing dresses to school. He even draws his outfits and is very interested in designing them

It is also reported that he has been bullied at school for wearing dresses by his classmates. However, the young kid doesn’t seem to mind it as his fondness for fashion is great and it doesn’t seem to bother those comments.

Megan said that he continues to enjoy wearing and drawing dresses for him to wear despite getting negative comments. She said the other boys in the class would laugh at him and his outfit but Noah didn’t care.

Noah continues to wear whatever he likes, thanks to his mother and fashion icon Megan being very supportive of his choices. She lets him wear whatever he wants and not only that, she also advises him to be confident in what he’s wearing.

With whom does Noah Shannon Green live with after his parent’s separation?

Noah Shannon Green’s parents have had to go through a failed marriage. They were together for around 14 years and after being engaged and divorced twice, they have recently separated again.

They have an age difference of 13 years. Brian was 30 years old and Megan was just 18 years old when they first met each other.

Megan Fox and Brian Austin Green met in the set of ABC’s Hope and Faith and Megan say she “instantly fell in love” when she saw Brian. The two began dating and have had a rocky relationship.

The couple got engaged in 2009 and after rumors of them separating, they got married in 2010 in Hawaii. Soon, they had Noah Shannon Green and Bodhi Ransom Green. But unfortunately, they separated and divorced in 2015.

A few months after their marriage ended, Megan was seen pregnant and after much speculation, she admitted the father was indeed ex-husband Brian Austin Green.

The two got engaged again in 2016 and Journey River Green was born. They were happily together until 2020. That was when Megan Fox filed for divorce again. They separated yet again after the divorce and the decade-long relationship came to an end.

It is reported that Megan and Brian share joint custody of their children and the children are spending time with both of their parents.

After their separation, there have been a few instances of disagreement between Fox and Green, especially on social media. Similarly, Brian Austin Green’s ex-wife Vanessa Marcil has also shared her dissatisfaction with Green.

Noah is currently very young and his individual net worth cannot be calculated. But he is enjoying his childhood with his famous parents. 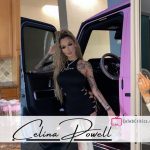 Next Story
Celina Powell bio, relationships, controversies, and net worth